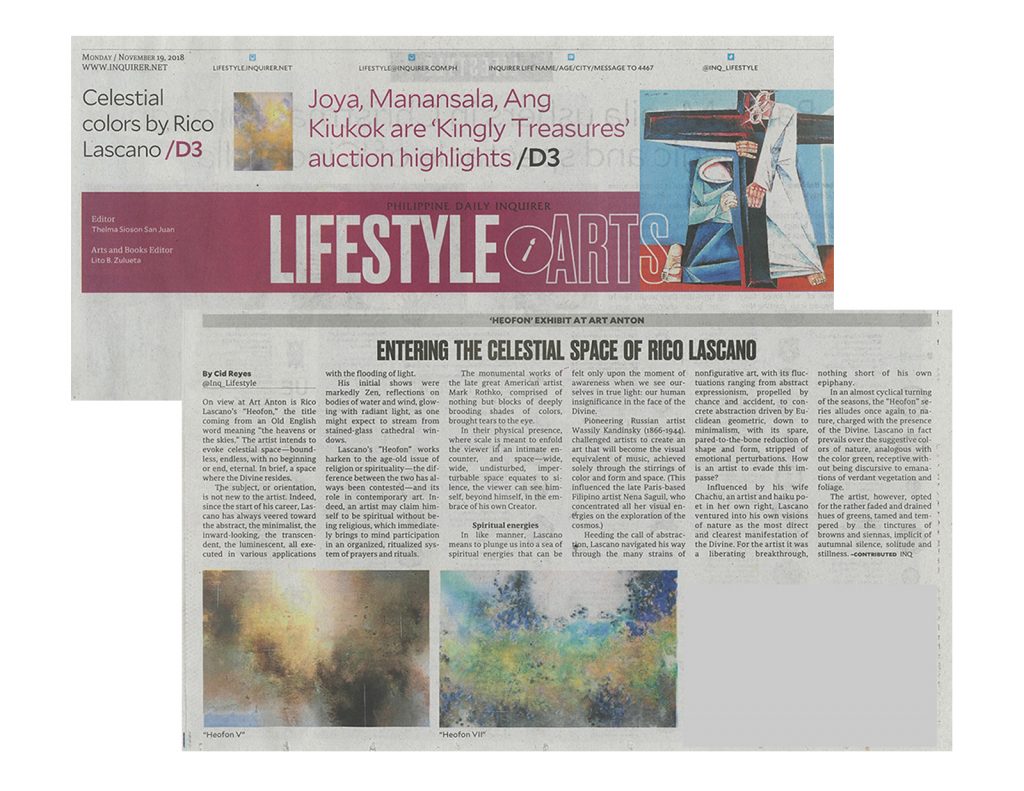 On view at Art Anton is Rico Lascano’s “Heofon,” the title coming from an Old English word meaning “the heavens or the skies.” The artist intends to evoke celestial space—boundless, endless, with no beginning or end, eternal. In brief, a space where the Divine resides.

The subject, or orientation, is not new to the artist. Indeed since the start of his career, Lascano has always veered toward the abstract, the minimalist, the inward-looking, the transcendent, the luminescent, all executed in various applications with the flooding of light.

His initial shows were markedly Zen, reflections on bodies of water and wind glowing with radiant light, as one might expect to stream from stained-glass cathedral windows.

Lascano’s “Heofon” works harken to the age-old issue of religion or spirituality—the difference between the two has always been contested—and its role in contemporary art. Indeed, an artist may claim himself to be spiritual without being religious, which immediately brings to mind participation in an organized, ritualized system of prayers and rituals.

The monumental works of the late great American artist Mark Rothko, comprised of nothing but blocks of deeply brooding shades of colors, brought tears to the eye.

In their presence, where scale is meant to enfold the viewer in an intimate encounter, and space—wide, wide, undisturbed, imperturbable space equates to silence, the viewer can see himself, beyond himself, in the embrace of his own Creator.

In like manner, Lascano means to plunge us into a sea of spiritual energies that can be felt upon the moment of awareness when we see ourselves in true light: our human insignificance in the face of the Divine.

Pioneering Russian artist Wassily Kandinsky (1866-1944) challenged artists to create an art that will become the visual equivalent of music, achieved solely through the stirrings of color and form and space. (This influenced the late Paris-based Filipino artist Nena Saguil, who concentrated all her visual energies on the exploration of the cosmos.)

Heeding the call of abstraction, Lascano navigated his way through the many strains of nonfigurative art, with its fluctuations ranging from abstract expressionism, propelled by chance and accident, to concrete abstraction driven by Euclidean geometric, down to minimalism, with its spare, pared-to-the-bone reduction of shape and form, stripped of emotional perturbations. How is an artist to evade this impasse?

Influenced by his wife Chachu, an artist and haiku poet in her own right, Lascano ventured into his own visions of nature as the most direct and clearest manifestation of the Divine. For the artist it was a liberating breakthrough, nothing short of his own epiphany.

In an almost cyclical turning of the seasons, the “Heofon” series alludes once again to nature, charged with the presence of the Divine. Lascano in fact prevails over the suggestive colors of nature, analogous with the color green, receptive without being discursive to emanations of verdant vegetation and foliage.

The artist, however, opted for the rather faded and drained hues of greens, tamed and tempered by the tinctures of browns and siennas, implicit of autumnal silence, solitude and stillness.

Cid Reyes is the author of choice of National Artists Arturo Luz, BenCab, J. Elizalde Navarro, and Napoleon V. Abueva. He received a “Best in Criticism” Award from the Art Association of the Philippines (AAP).